X- Throw wife into the air to evade  wolf attacks!

You and your wife are professional hunters. Your wife shoots a wolf and now is being attacked by a pack of wolves! You, as her husband have to save her!

Jump, and throw your wife up into the air!  (She wouldn't like you to drop her- hurts)

Swampy lands are easier for wolves to attack. Unless you have a good weapon with enough ammo, its better to stay out.
Before entering the next area, the Cave, make sure your wife has adequate HP.
If you have already entered Area 2, you can always go back to Area 1 to get some extra HP and ammo!

Wait for wolves to spawn for collecting coins.

Its gonna be tough out there! Best of Luck!

As for the "throwing" mechanism,

We do not encourage any such behaviour with any person whether it be a child, a grownup woman or man. We don't have any intention to hurt a person's feeling, nor do we support any sort of negative prejudice against any gender.

Thanks to Subham and Tabrez who are good at programming for helping me out and supporting me. Due to my errors in managing our team we had almost ended up at a position where we thought we would fail to submit. We had no time to discuss. Other’s code are so confusing to have a look at. That’s when I decided to do the programming myself from scratch! As a result a lot of features are missing.

But, we enjoyed the jamming session and learned a lot! 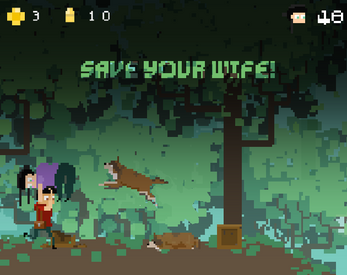